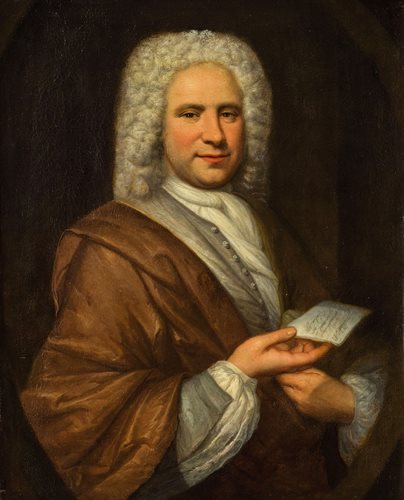 The proposed work, which shows the fascinating portrait of the French composer Michel de La Barre (Paris 1675 - 1745), dressed in the most traditional 'French' fashion of the early eighteenth century, is to be placed in the entourage of the painter Hyacinthe RIGAUD ( 1659 - 1743), one of the most significant portraitists of his time and great interpreter of the French school, working almost exclusively on the courts of Louis XIV and later Louis XV.
De la Barre was the first of the great French flutists known and thanks to his compositions, founding the first French school of transverse flute.)
The work uses a formula often used by Rigaud and his studio for the portraits of members of the French aristocracy, presented semi-profile, in our case slightly turned to the right, with the classic wig that identifies the social high, whose gaze with the viewer. He holds in his hand an open letter in which, even if it is unclear, it is possible to read a few words, most likely bearing the name of the person represented and the signature of the author.

The work is presented in a very good state of preservation, complemented by a beautiful carved wooden frame of the time.

Hyacinthe RIGAUD (Perpignan, 1659 - Paris, 1743), was a French painter of Catalan origin. In 1682, he won the Prix de Rome, which enabled him to stay at the French Academy in Rome, but on the advice of Charles Le Brun, he gave up the prize and concentrated on his activity as a portrait painter. At the court of Louis XIV he met the favors of the ambassadors, ecclesiastics, courtiers, and businessmen who posed for him. His portraits, both sumptuous and austere, are now also considered a source for the history of costume and fashion, because, in addition to the physiognomic resemblance, they manage to restore the details of clothing and furniture. The most famous work of Rigaud is the official portrait of King Louis XIV (signed and dated 1701), preserved in the Louvre Museum (a copy, made by the artist at the request of the sovereign, is located in the Palace of Versailles ). He became an Academician of France in 1700 and in 1701 he was appointed painter of the king. In 1709, he joined the nobility of his hometown and in 1727 he was named Knight of the Order of San Michele.

For more information, please contact us. You can also see the painting in our gallery in Riva del Garda, we will be happy to welcome you to show you our collection of works.