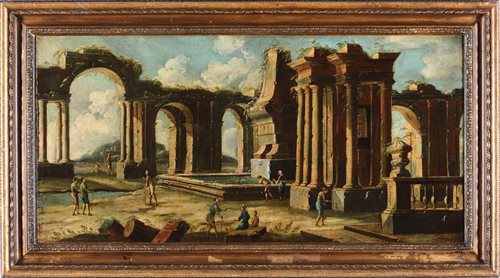 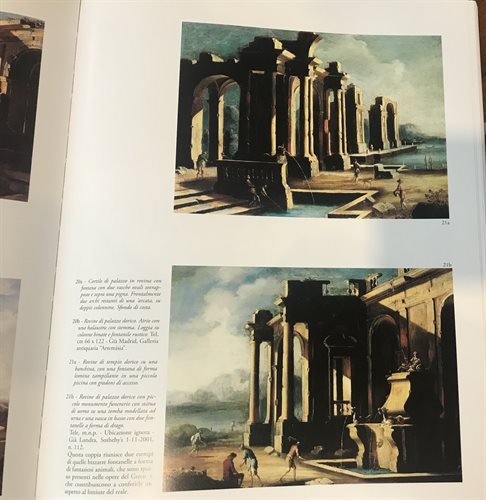 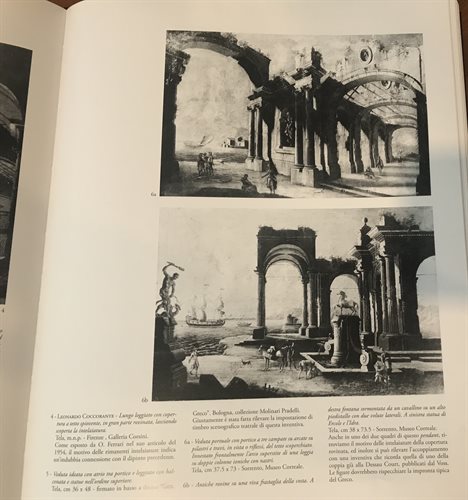 The compositional richness of the architecture, combined with the skilful perspective construction accentuated by the scenic depth, lead the present work to the Neapolitan Gennaro Greco, known as Mascacotta, a specialist in the genre of ruin with architectures.
His production is part of that fashion of painting of fantastic palaces, colonnades, fountains, arcades and fairy-tale architecture, a genre introduced in Naples by François de Nomé (Monsù Desiderio) and Viviano Codazzi, who had immediately found a flourishing market in the Neapolitan city.
His architectural inventions and the quality of his works thus place the Greek as a link between Viviano Codazzi and the Neapolitan whims of Leonardo Coccorante (active in Naples in the first half of the eighteenth century).
As can be seen from our view, its interpretative taste is aimed at delicately Arcadian intonations. His palette is devoid of forcing and violent hues, with predominantly blue-gray hues, sometimes tending to yellow, with harmonized drapes with uniform chiaroscuro effects.
Of the "ruinista" production of the Greco, many oil paintings on canvas are known today, mostly of small size; Among those kept in public collections stand out the two Ruins of the Museo Correale di Salerno (see photo), which show very strong similarities with our canvas.
As the whim under examination, are works conducted with great attention to detail and characterized by an intense chiaroscuro contrast, where the ruin acquires the function of a perspective instrument, closely connected to the experiments conducted in those years in the field of theatrical scenography.
Reference bibliography:
G. Sestieri, The architectural capriccio in Italy in the seventeenth and eighteenth centuries, II volume, edition Etgraphiae 2015.
back